Tickets to see a favorite band or a favorite sports team are protected by fans prior to the event like a mother lion protects her cubs. Once inside, tickets end up in the trash, on the floor, or act as an emergency napkin because you just had to have the extra mustard on your hot dog. Loaded tickets instantly change tickets from emergency napkins into something of value, even once fans are inside the event.

What Exactly is a Loaded Ticket?

A loaded ticket, or stored-value ticket, allows teams, stadiums, bands, or other venues to load money directly onto a fan’s ticket. This stored-value is then used as a form of payment at concession stands, merchandise stores, or any other vendor at the event.

Stadiums, teams, performers, and venues continue to compete for people’s discretionary spending on entertainment. According to an August 2017 news release from the Bureau of Labor Statistics, the percent of total income people are spending on food and entertainment outside of the home increased 4.9% and 2.5% respectively in 2016, after increasing 7.9% and 4.2% respectively in 2015. As teams, stadiums, and venues compete for those dollars, a ticket without an obstructed view (looking at you Fenway Park) just won’t cut it anymore. From turf suites at U.S. Bank stadium, new home of the Minnesota Vikings, to a swimming pool at Everbank Field, home of the Jacksonville Jaguars (we’ll let you search for images of that on your own), both new and old stadiums are focused on enhancing the fan experience. Loaded tickets can play a role in that enhanced fan experience in a number of ways: 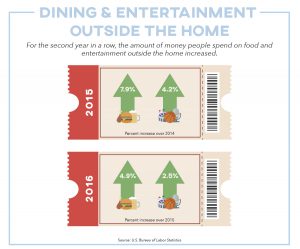 The Shorter the Line, The Happier the Fan

As the clock ticks down to the end of the first quarter, or even worse, halftime, take a look around and notice the slow trickle of fans headed for the concession stands. Wait for the buzzer to sound, and notice the slow trickle is now a stampeding herd. Because most fans don’t want to miss a minute of the action, concession stands experience extremely busy peak times, and extremely slow down times. With loaded tickets, teams and venues can run special promotions tied to a time period that can help alleviate long lines. For example, a team that uses loaded tickets could run a special promotion that applied only to the last five minutes of the second quarter, with the goal of getting people to visit the concession stands before the halftime rush.

In With the New, Out With the Old

In addition to running special promotions that are time constrained, venues, teams, and food service companies, can also run special promotions to introduce fans to new items or clear out concession items that are approaching their expiration date to reduce or prevent loss. For example, if a restaurant operated a location in the local baseball stadium, and created a new seasonal, artisan sandwich, they could work together with the stadium to run a promotion, tied to the value of the loaded tickets, to entice fans to try the new sandwich.

Make Your Fans Feel Like Part of the Game

If a professional basketball team has a player chasing a career milestone, 20,000 career points for example, the team may offer all fans in seat #20 an additional $10 loaded to their ticket, in real-time, during the game. Teams and venues may also load money to tickets to incentivize ticket purchases prior to a game, such as offering value that can be used to pay for parking at the event.

When a team, stadium, or other venue is thinking of implementing loaded tickets, there are a number of considerations to make and questions to ask. The answers to these questions can help create a roadmap to choosing a provider and an implementation strategy.

Discussing these questions both internally and with potential loaded ticket solution providers will ensure fans get the value and excitement that loaded tickets can deliver.

DishOut is a payment technology provider offering traditional payment gateway services including EMV and closed-loop stored value along with a full suite of mobile solutions including mobile payments, pay-at-the-table, online and mobile ordering, loyalty and rewards, and more. DishOut’s stored-value and loyalty solution, called DishOut PLUS, offers a loaded tickets feature called Tickets PLUS. This feature allows stadiums, venues, and teams to implement a loaded tickets solution that can be customized to fit specific goals and needs and works seamlessly with the rewards engine in DishOut PLUS so fans can even earn rewards as they attend their favorite events.

To learn more about DishOut or Tickets PLUS, contact us today.